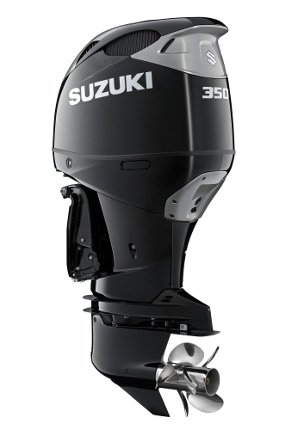 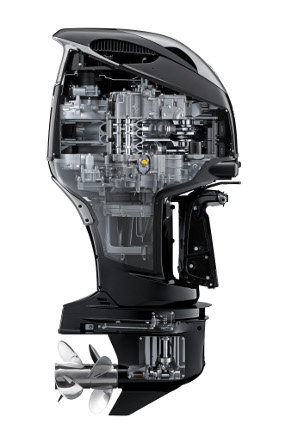 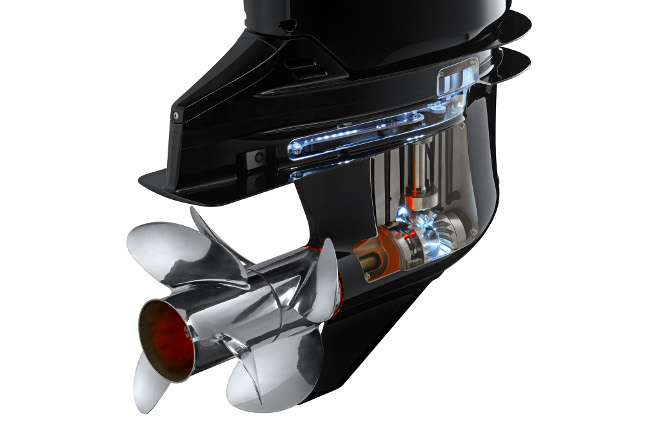 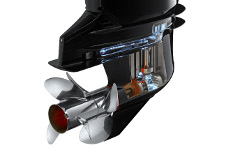 Suzuki Marine, a leader in 4-stroke outboard technology and performance, is proud to introduce its newest model, the DF350A. At 350 horsepower, this V6 4-stroke is the largest, most powerful outboard Suzuki has built to date. In development for more than three years, it represents a significant milestone in both engineering and design.

"We have put a lot of work into this new outboard and we cannot wait to see how the market responds. We have watched with great interest as boats have gotten bigger, especially the center console market," said Yasuharu Osawa, Executive General Manager, Global Marine & Power Products Operation, Suzuki Motor Corporation. "Not only that, but we've seen an increasing preference for outboards on all kinds of boats that used to be exclusively stern drive or inboard. The time is ripe for this new outboard, and we think you're going to love it."

Suzuki engineers achieved 350 horsepower while still designing a compact, lightweight powerhead. The robust engine displacement of 4.4 liters is matched by a high-performance 12.0:1 compression ratio, the highest ever for a production outboard engine. A unique combination of cool air intake, dual fuel injectors and a strengthening of the pistons has virtually eliminated engine knock, a typical by-product of high compression engines.

Suzuki engineers have designed an air intake system that allows the engine to draw in ample fresh air, while separating out water, spray and moisture. Dual louvers under the hood trap larger water droplets and then moisture as it enters the engine cowling, resulting in zero water intake during testing. In addition, intake air temperatures are, on average, 10ş cooler than ambient, providing the combustion chamber with cooler, denser air for a more powerful cycle.

Two, smaller fuel injectors allow for precise injection of fuel to the center of the combustion chamber, which avoids off-center combustion - a major cause of knocking. In addition, because 100% of the fuel is injected into the cylinder at once, a degree of cooling is also obtained, providing up to 3% additional power without causing knocking.

To achieve 350 horsepower, the surface of the piston needs to withstand added forces. In order to assure both performance and long life, Suzuki engineers switched from a standard heat treatment to "shot peening." Shot peening, a more expensive process, creates fine dimples in the face of the piston that evenly distribute the pressure created during combustion. In addition, the connecting rods and hardware have been strengthened to handle the added loads.

While contra-rotating propellers are not a new technology, they have never been successfully used on outboard motors until now. The DF350A's dual propellers provide three key benefits, compact size, increased stability and greater "traction."

By distributing the power of the engine over six blades, instead of just three, the size of the gears and gearcase could be kept to a minimum, which in turn allowed for the design of sleeker, more hydrodynamic gearcase. Suzuki engineers spent many hours in computer simulation and on the water, knowing that reducing drag underwater would be essential to improving overall boat speed and performance.

Contra-rotating propellers also provide added surface area, for more stability and increased "traction" or grip underwater. (Think of the wide slicks on a drag racer as compared to typical tires.) This results in exceptional acceleration, or hole-shot, truer directional propulsion (eliminating steering torque), better than expected top speeds and incredible reverse thrust. Importantly, these benefits are apparent even on heavier boats with full loads of fuel, gear and people.

"While these new engines feature a lot of new and innovative technology, they also take advantage of Suzuki's proven systems," added Mr. Osawa. "We wouldn't call them The Ultimate 4-Stroke Outboards without building in superior reliability and dependability over the long haul."

Like Suzuki's other V6 outboards, the DF350A features Suzuki's offset driveshaft engine layout, which allows for a more compact outboard and two-stage gear reduction. Two-stage gear reduction provides a larger reduction gear ratio (2.29:1) and more torque for quick acceleration, and improvements in top speed, as well. (It is worth noting that the DF350A can be mounted 27-inches on center, so it will fit on more transoms, and take up less space in twin, triple and quad installations.)

The DF350A also takes advantage of Suzuki's Lean Burn Control Technology, for improved fuel economy throughout the entire rpm range, and especially at cruising speed. Like all Suzuki 4-stroke outboards, the DF350A is extraordinarily quiet at idle.

As you can see, the development of this new outboard has been driven by Suzuki's belief that it is important to provide the market with more than just horsepower. While power and speed are critical factors, the added dimensions of efficiency, reliability and stability make the DF350A the Ultimate 4-Stroke Outboard.

"We've taken the time in the design process to come up with what we think is the Ultimate new outboard motor," said Mr. Osawa. "The DF350A is ready to take on all the challenges and demands of today's boats - and deliver a 'wow' to skippers who have been looking for new power to handle their bigger boats."